Videos should be coming shortly…like tonight.

UPDATE: Or maybe tomorrow.  Got everything updated (XP, Vista with Service Packs and video editing software, new version, and other patches, and a new monitor) and now we’re done with last week’s program.  I am hoping to get these done and uploaded by Sunday night, Monday at the latest, so far I haven’t made it.  My plan right now calls for 10 weeks of this stuff, which takes us right through the election.  Feel free to offer feedback.

Here’s the outline (for all three parts):

[Charles Gibson] asked Palin, “Do you agree with the Bush doctrine?”

She responded, quite sensibly to a question that is ambiguous, “In what respect, Charlie?” 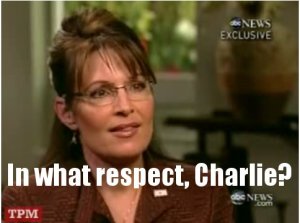 Sensing his “gotcha” moment [1], Gibson refused to tell her. After making her fish for the answer, Gibson grudgingly explained to the moose-hunting rube [2] that the Bush doctrine “is that we have the right of anticipatory self-defense.”

I know something about the subject because, as the Wikipedia entry on the Bush doctrine notes, I was the first to use the term. In the cover essay of the June 4, 2001, issue of the Weekly Standard entitled, “The Bush Doctrine: ABM, Kyoto, and the New American Unilateralism,” I suggested that the Bush administration policies of unilaterally withdrawing from the ABM treaty and rejecting the Kyoto protocol, together with others, amounted to a radical change in foreign policy that should be called the Bush doctrine.

Then came 9/11 [3], and that notion was immediately superseded by the advent of the war on terror.

[1] It was the “moose in headlights look in her eyes.
[2] “I’m a victim” argument.
[3] [And, as you’ve said any number of times…everything changed…including what you called the “Bush Doctrine.” ]

So a bunch of right-wingers have been using this to defend Palin’s complete lack of knowledge regarding the fact that Bush and his neocon buddies (one of which is teaching her foreign policy) completely changed the foreign policy philosophy of the United States.

The lie is easily exposed quickly. Watch now, if you can ignore facts like this, you too, can be a hack.

KRAUTHAMMER: I was the first to use the term. In the cover essay of the June 4, 2001, issue of the Weekly Standard entitled, “The Bush Doctrine: ABM, Kyoto, and the New American Unilateralism,”

GIBSON: Do you agree with the Bush doctrine?

PALIN: In what respect, Charlie?

GIBSON: No, the Bush doctrine, enunciated September 2002, before the Iraq war.

So in his inredibly egotistical daydreams, Charles Krauthammer has forgotten 9/11.

You see, in between Krauthammer writing BS policy for PNAC and AEI in June 2001 and the U.S. invading Iraq in 2002, there was a rather large event.

Since Gibson specifically mentioned what he was talking about, and Krauthammer specifically omitted Gibson mentioning that, you can see who the liar is here.

Palin had no idea was any of them was, and offers a couple of complete non-answers. Some, like Krauthammer, have jumpted to Palin’s defense and said that the term is ambiguous. But given Gibson’s clarification, that Kruathammers somehow missed, and the fact that the official through colloquial understandings of the term all have nothing to do with how she answered (I think she thought it was the “War on Terror” which is even more ambiguous).

She didn’t know what it was. If you would like to, please read on.

Then, if McCain nominates you for Vice President (and it is possible) you can know better….he certainly did….