It seems as if a certain political sentiment has fully metastasized into the form it will take for the next 7 months.  It goes something like this…as Krugman notes on point..

And it’s not just gas prices, of course. In fact, the conspiracy theories are proliferating so fast it’s hard to keep up. Thus, large numbers of Republicans — and we’re talking about important political figures, not random supporters — firmly believe that global warming is a gigantic hoax perpetrated by a global conspiracy involving thousands of scientists, not one of whom has broken the code of omertà. Meanwhile, others are attributing the recent improvement in economic news to a dastardly plot to withhold stimulus funds, releasing them just before the 2012 election. And let’s not even get into health reform.

Why is this happening? At least part of the answer must lie in the way right-wing media create an alternate reality. For example, did you hear about how the cost of Obamacare just doubled? It didn’t, but millions of Fox-viewers and Rush-listeners believe that it did. Naturally, people who constantly hear about the evil that liberals do are ready and willing to believe that everything bad is the result of a dastardly liberal plot. And these are the people who vote in Republican primaries.

But what about the broader electorate?

Now before you think any of this (or the many, many other examples) are hyperbolic statements about what is passing for “policy discussion” among the dedicated Republican primary voters…here’s an update on what they think is going on…

Seriously…that’s an official Santorum ad.  Wild stuff….BTW…DID YOU NOTICE HOW CRAZY THIS IS?

About :40 seconds in…with the Iranian Boogeyman on the screen…they cut in a shot of the President of the United Stated. 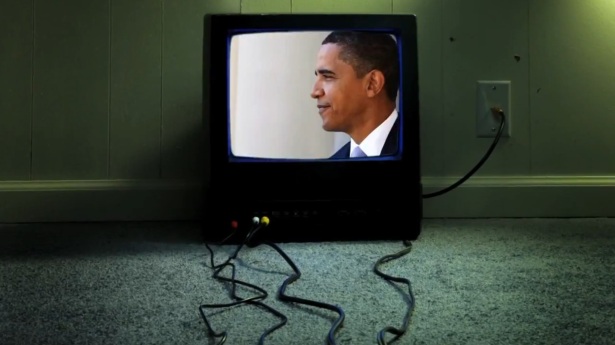 That’s how craaaazy these folks are.  Don’t believe me yet?  Here’s another one, of a thousand, of other examples.

And one that more directly affects real people…

On Monday, the Republican dominated Tennessee Senate passed an anti-evolution bill by a vote of 24-8. The bill, known as HB 368, is sponsored by Republican Senator Bo Watson and “provides guidelines for teachers answering students’ questions about evolution, global warming and other scientific subjects,” according to Knox News,  ”The measure also guarantees that teachers will not be subject to discipline for engaging students in discussion of questions they raise, though Watson said the idea is to provide guidelines so that teachers will bring the discussion back to the subjects authorized for teaching in the curriculum approved by the state Board of Education.” The bill basically encourages teachers to present scientific weaknesses of “controversial” topics.

It’s come to the point of people just flat out not believing what is happening….which while not completely abnormal in political season…has gotten so bad that basic math has become partisan politics.

My calculationslast year, based on the proposed cut of 3.1 percentage points, suggested that the payroll tax cut “could raise employment by at least a million, albeit the duration of job creation is related to how long the tax cut lasts.”

One of the main changes is the inclusion of more data from the Arctic region, which has experienced one of the greatest levels of warming.

The amendments do not change the long-term trend, but the data now lists 2010, rather than 1998, as the warmest year on record.

The update is reported in the published in the Journal of Geophysical Research.

And leading to some absolutely tragic decision making abilities…

It seems that this old lady believed many of the deliberate lies which were being put forward by the Fox News anchor, lies directed at President Obama and at his health care policy. She appears to have thought that if she had accepted medical care, following her fall, her medical information and her money would have been sent to Islamic extremists. This is of course completely false, but a reasonable deduction from the lies told by Fox News.

Which happens while the system keeps chuggin’ along…

In February, Common Cause wrote to House Majority Leader Eric Cantor, asking for an explanation about an apparently unreported $1,350 gift from the American Legislative Exchange Council (ALEC) in 2009. Cantor’s office immediately responded, claiming our inquiry was without foundation, but last week his office quietly amended his financial disclosures to include the gift from ALEC.

At that time, I wrote about Cantor’s failure to disclose:

‘ALEC, the so-called “free market, small government” lobby group underwritten by some of the nation’s largest corporations, reported in its tax filings for 2008 and 2009, making “cash grants” to the recipients of several annual awards. Common Cause has identified 22 legislators who received ALEC awards in those two years, including Rep. Cantor, who ALEC records indicate received $1,350 in 2009 as part of their Thomas Jefferson Freedom Award.’

Cantor responded within hours, saying no cash changed hands, but that he received a bust of Thomas Jefferson from ALEC, pictured above. But, under House Ethics Rules this type of award can only be received by a Member of Congress if it is disclosed, which Cantor did not do. This appears to be a clear ethics violation, and we have asked the Office of Congressional Ethics to investigate. Prompted by Common Cause, Cantor has now very quietly amended his 2009 Financial Disclosure Report to include the ALEC gift. He also amended his 2010 report to include another bust given to him by the Associated Builders and Contractors trade group. We had no idea about this second award, but now we do.

Even as another does the math, and realizes that we simply cannot go on like this…

However, Dodd–Frank does not eradi- cate TBTF. Indeed, it is our view at the Dallas Fed that it may actually perpetuate an already dangerous trend of increasing banking industry concentration. More than half of banking industry assets are on the books of just five institutions. The top 10 banks now account for 61 percent of commercial banking assets, substantially more than the 26 percent of only 20 years ago; their combined assets equate to half of our nation’s GDP. Further, as Rosenblum argues in his essay, there are signs that Dodd– Frank’s complexity and opaqueness may evenbe working against the economic recovery. In addition to remaining a lingering threat to financial stability, these megabanks signifi- cantly hamper the Federal Reserve’s ability to properly conduct monetary policy.

They were a primary culprit in magnifying the financial crisis, and their presence continues to play an impor- tant role in prolonging our economic malaise.There are good reasons why this recovery has remained frustratingly slow compared with periods following previous recessions, and I believe it has very little to do with the Federal Reserve. Since the onset of the Great Recession, we have undertaken a number of initiatives— some orthodox, some not—to revive and kick-start the economy. As I like to say, we’ve filled the tank with plenty of cheap, high-octane gasoline. But as any mechanic can tell you, it takes more than just gas to propel a car.

It is imperative that we end TBTF. In my view, downsizing the behemoths over time into institutions that can be prudently managed and regulated across borders is the appropriate policy response. Only thencantheprocessof “creativedestruction”— which America has perfected and practiced with such effectiveness that it led our country to unprecedented economic achievement— work its wonders in the financial sector, just as it does elsewhere in our economy. Only then will we have a financial system fit and proper for serving as the lubricant for an economy as dynamic as that of the United States.

And so the desktop is clear…to watch the world for another couple weeks.

The Republicans then turned around and immediately started lying about what they did.

All in a fight to give more breaks to Big Oil.

UPDATE: Even the WSJ is calling b.s. on this…even while doing so in a b.s. way.

GOP Senate leader Mitch McConnell famously said a year ago that his main task in the 112th Congress was to make sure that President Obama would not be re-elected. Given how he and House Speaker John Boehner have handled the payroll tax debate, we wonder if they might end up re-electing the President before the 2012 campaign even begins in earnest.

The GOP leaders have somehow managed the remarkable feat of being blamed for opposing a one-year extension of a tax holiday that they are surely going to pass. This is no easy double play.

Republicans have also achieved the small miracle of letting Mr. Obama position himself as an election-year tax cutter

Had to cut that off mid-derp, as the WSJ editorial board tends to include utter b.s. even when pointing out the obvious.   Obama is not really an “election-year tax cutter”, as this tax cut went into effect last year as part of the successful stimulus.  It is, in face, because of this success, Republicans are now working to undercut it.

It should also be noted that, unlike the original Bush Tax Cuts, Republican are now insisting this tax cut (which goes to workers) will reduce government revenue and therefore needs to be paid for.  This is a complete 180 from their stance about tax cuts for the wealthy (aka “job creators”), as Republicans claim those pay for themselves.   This is probably the most base and obvious lie in the Republican quiver, and they whip different versions of it out every time the subject comes up.