The letters from Goodman and from the London law firm Harbottle & Lewis are among a cache of paperwork published by the Commons culture, media and sport select committee. One committee member, the Labour MP Tom Watson, said Goodman’s letter was “absolutely devastating”. He said: “Clive Goodman’s letter is the most significant piece of evidence that has been revealed so far. It completely removes News International’s defence. This is one of the largest cover-ups I have seen in my lifetime.”

Goodman’s letter is dated 2 March 2007, soon after he was released from a four-month prison sentence. It is addressed to News International’s director of human resources, Daniel Cloke, and registers his appeal against the decision of Hinton, the company’s then chairman, to sack him for gross misconduct after he admitted intercepting the voicemail of three members of the royal household. Goodman lists five grounds for his appeal.

Les Hinton used to run the WSJ, which use to be run by a respectable family.

Here’s the news, unsurprising to those who follow this sort of stuff…

WASHINGTON — The income gap between the richest and poorest Americans grew last year to its widest amount on record as young adults and children in particular struggled to stay afloat in the recession.

A different measure, the international Gini index, found U.S. income inequality at its highest level since the Census Bureau began tracking household income in 1967. The U.S. also has the greatest disparity among Western industrialized nations.

At the top, the wealthiest 5 percent of Americans, who earn more than $180,000, added slightly to their annual incomes last year, census data show. Families at the $50,000 median level slipped lower.

And the “money” quote…

Rea Hederman Jr., a senior policy analyst at The Heritage Foundation, a conservative think tank, agreed that census data show families of all income levels had tepid earnings in 2009, with poorer Americans taking a larger hit. “It’s certainly going to take a while for people to recover,” he said.

Yes, it’s going to take a while, especially if we extend Bush’s tax-cut giveaway to the rich while pililng debt on everyone else.   And his “a while to recover” is actually more accurately phrased as “never”.  There isn’t going to be a recovery, in this sense, given the current environment.

And what is the current environment, you ask?   Here’s a hint…

More people are getting their news about the upcoming election from cable television than any other source, and from Fox News more than any other cable channel, according to a POLITICO/George Washington University Battleground Poll released Monday.

The poll found that 81 percent of those polled get their news about the midterm elections from cable channels, like Fox News, CNN, MSNBC, or their websites, compared with 71 percent from national network news channels, such as ABC, NBC or CBS, and their websites.

Among cable news channels, Fox was the clear winner, with 42 percent of respondents saying it is their main source, compared with 30 percent who cited CNN and 12 percent who rely on MSNBC

You know the sad part?  The most popular news outlet is the one claiming to be the least popular, continuously.   It’s become a cliche even, with the most powerful player and victimizer claiming to be the weakest and the victimized.   Sure, study after study shows that Fox News viewers have a faulty view of reality (death panels, illegals covered under HCR, WMD in Iraq, Saddam and 9/11, Obama’s a socialist who the world hates, etc, etc…) but that doesn’t even slow them down.  After all, studies and learnin’ are liberal, and therefore evil, ideas.

Heck, even today Mr. Murdoch has one of his minions arguing that his taxes need to be cut even lower (BTW, that article is filled with the usual Fox wharrgarbl, damned lies and statistics [compare]).   It’s also an argument for how News Corpse taxes should be cut…again.  This picture seems somewhat appropriate…. 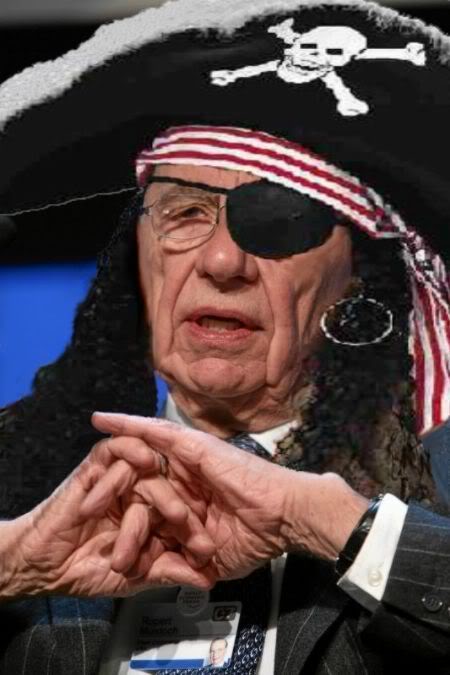 …especially when we look at the rest of the data from that first link.

_The poorest poor are at record highs. The share of Americans below half the poverty line — $10,977 for a family of four — rose from 5.7 percent in 2008 to 6.3 percent. It was the highest level since the government began tracking that group in 1975.

_The poverty gap between young and old has doubled since 2000, due partly to the strength of Social Security in helping buoy Americans 65 and over. Child poverty is now 21 percent compared with 9 percent for older Americans. In 2000, when child poverty was at 16 percent, elderly poverty stood at 10 percent.

_Safety nets are helping fill health gaps. The percentage of children covered by government-sponsored health insurance such as Medicaid and the Children’s Health Insurance Program jumped to 37 percent, or 27.6 million, from 24 percent in 2000. That helped offset steady losses in employer-sponsored insurance.

And so it goes…

BTW, this angle of analysis (income disparity) was probably the strongest indicator that we were headed for a collapse.  Previous to the recent economic troubles, the last time the U.S. had diverged so far between the haves and have nots was right before the Great Depression.

When the labor force of a country realizes that no matter how hard they work they won’t make any progress, and the real money is being made by people who do no real work, it has far-reaching consequences.

UPDATE:  Oh, and I missed this horribleness….

Again, this demonstrates rather forcefully that those referencing the “lamestream media” (you know, people who use those terms, like girls in junior high school) are talking about Fox.

This poll seemed somewhat off, and I finally saw the bright spot and the explanation…

This is something of a side note and a bit of positive news for the future.  Once the Boomers die off, we might actually have a chance of having an informed  (rather than faux outraged) electorate again.   Unfortunately they’ll be so cynical and snarky anyone endeavoring to actually fix the huge mess the Boomers will leave us with will face constant ridicule.   Hmmm, maybe we already live in the  future…

Look, I’ve got nothing against Rick Warren personally.  From what I’ve seen he seems like a nice guy who does some good work.  My problem is with the lack of…shall we say…accountability of his theology.  And the lack of reason and logic in his worldview.   In his mind, what you do in life doesn’t matter, as long as you declare your love for God, it’s all good.

This leads to some really, really, nasty things when applied to real life, which is far more complex that it seems Mr. Warren is capable of conceiving.

Read on for that argument…