Russia’s military has resumed its Cold War practice of flying regular patrols far beyond its borders, and in the last year has also sent turbo-prop Tu-95s over U.S. naval aircraft carriers and the Pacific island of Guam. 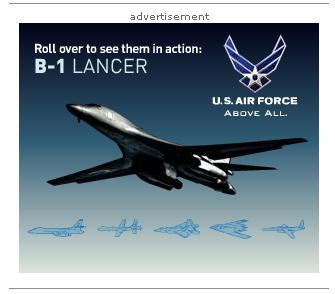 One thing that I ‘love’ about the Military industry is their ability to place good ads.
[to understad the irony of this post: this story, about Russian bombers buzzing Alaska, is accompanied by an advertisement from the U.S. Air Force about their cool-ass bombers. The B-1 Bomber was initially designed as a counter-measure to long-range Russain bombers.]