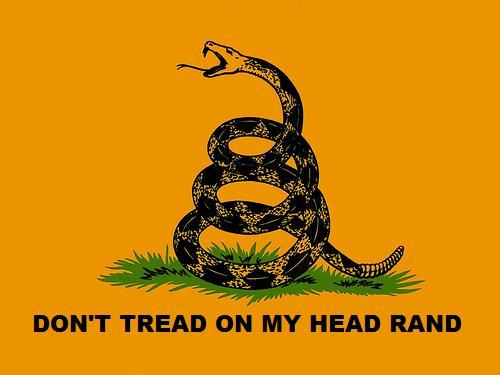 Don't Tread on my Head

So this little juicy bit of the real world is making the rounds.  First up, the video evidence…

Yes, yes, I know, a bit more violent and nasty than my normal fare.  That’s Election 2010 and the joy the Tea Party has brought to American politics.

This story, BTW, gets funnier.

The Rand Paul campaign volunteer who stepped on the head of a liberal activist after she had been wrestled to the ground outside a debate said Wednesday that the incident has been blown out of proportion and that the activist owes him an apology. “She’s a professional at what she does,” Tim Profitt, who was fired Tuesday from Paul’s Senate campaign, said in an interview with local television station WKYT. “When all the facts come out people will see that she’s the one who initiated the whole thing.”

A fairly typical response from serial abusers, “she was asking for it.”   It is highly creative to physically assualt someone and then demand they apologize to you. That’s some serious hutzpaugh, or, when spelled correctly and translated to English, bullshit. [He topped himself by blaming “back pain” for why he needed to stomp.]

This is of course a completely isoloted incident (like this one was) and in no way represents the fantasies of Limbaugh-loving folks across the country.  Oh, to have a liberal to, litterally, grind under the heel of your boot.   And to do so while wearing a “Don’t Tread on Me” button.  Delicious, I say.  Or at least I would if I had violent fantasies about showing liberals who’s the boss.  Not that I think all these folks have these fantasies, but after seeing this one realized and those who quickly jump to his defense…it doesn’t seem to be an uncommon dream.

But the real punchline on this one, for me at least, is this full page ad that ran *today* touting the head-stomper’s support for Paul in the coming election.

As a final bit on this, and our current, horrid, corporate meida, this Examiner looked at how Fox (who has largely ignored this one, as per) would cover it were the situation somewhat reversed.

–  Megyn Kelly would spend the entire hour of “America Live” devoted to expressing various levels of outrage.  Even more outrage would be expressed toward those who were baselessly defending the attackers.  The clip would be shown at least a dozen times, as Kelly did with the New Black Panther’s case footage.-  Glenn Beck would begin his show with a mix of tears and anger.  He would say this is a fulfillment of his prophecy regarding “violence” coming from the radical left.  He would compare the attack to attacks by the “Brownshirts” of Nazi Germany, and claim this is just the first step in larger progressive waves of violence.  Beck would then bring out his chalkboard to connect the attackers to George Soros, the Tides Foundation, NPR, and – yes – President Obama himself.  Beck would then warn his audience of the coming economic collapse, before cutting to a Goldline commercial.

–  Bill O’Reilly would send some of his producers to demand answers from individuals who had nothing to do with the attack.  In his “Talking Points”, O’Reilly would condemn the entire Democratic Party and explain how this will doom them in the upcoming elections.

Ultimately, I think this is just another asshole who self-identified with the Tea Party.  Like this one. And this one. And this one. All completely isolated incidenst of crazy and extremism.  Sure, every single major (and many minor) Tea Party candidates have all had these isolated incidents.  But that doesn’t mean anything, as I’m told repeatedly, when this stuff just keeps happening week after week, that these are all isolated incidents, and certainly not indicative that a bunch of extremists have wormed their way into the mainstream during a time of crisis.

One would like to think that the crazy will subside after another week or so when these (and many sane) folks act like citizens and  get thier vote on.   I, for one, am happy to be able to vote *against* the guy that called for violent revolution if he loses at the ballot box.

Hopefully, the nutjob fringe will recede a bit after this election, but considering that Chairman Fartbama HUSSEIN Obungo will still be President (as some so maturely refer to him), I’d expect the crazy to continue for 2, probably 6, more years.

At least we get some solid lulz out of the deal, and only one girl had to be head-stomped for it.