In the first emergency step, Treasury on Friday will stop issuing state and local government series securities, commonly known as SLGS. That could make it harder for states and cities to issue debt, because they will have to seek issuers in the private market. If the debt limit hasn’t been raised by May 16, the government will begin delaying payments into two government pension funds and redeeming Treasury securities in those funds.

UPDATE: This was a draft from a bit back, here’s the latest news…

As the Treasury department has been warning — and as House Republican leaders have promised — the United States hit its debt limit Monday morning. The government can no longer meet its obligations by borrowing more money. And since incoming revenues aren’t sufficient to pay for the services Congress has ordered and for interest payments on existing debt, the Treasury department is taking a series of ever-more extraordinary measures to pay all of its bills.

This was as threatened by the Derp Brigade (also known as the Tea Party).  They believe that by simply not paying for our obligations, we won’t have them any more.    These folks have convinced themselves that the lowest tax rate in their lifetime is the highest tax rate in the history of the Universe, and the only way to make that point is not to pay down the debt DRIVEN UP BY THAT SAME RATE.

Here’s the graph, putting the tax cuts in proportion to everything else that is blamed… 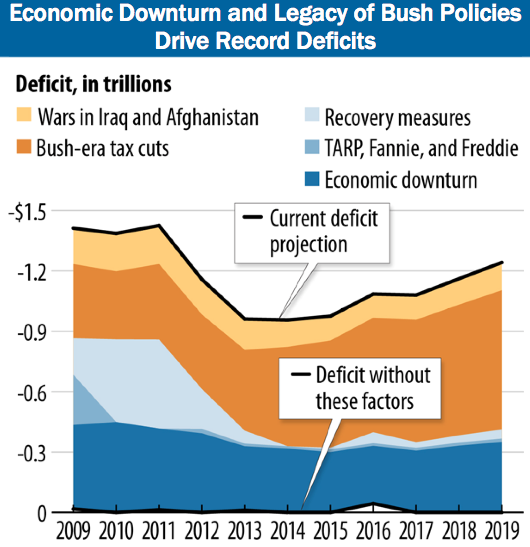 All the while one of their mouth is saying “all options are on the table” to deal with the debt, and the other side screaming, “EXCEPT FOR TAXES!!!”.     When you have have one-half of government refusing to consider the concept of “taxes” being used to pay for “government debt”, you know how crazy we’ve become.

And hopefully now everyone can see how bass-ackwward tea-rarded certain groups of political activists have been shown to be.

UPDATE:  This story is about this same group of idjits.   To understand the level of hypocrisy here…this is group elected by the elderly after complaining about how Obama was going to cut Medicare, then voted to essentially end Medicare, then got rightly lambasted by their constituents and realized they’d spent the first 25% of their term making sure it would be their only one….and finally have the temerity to write the President and ask for a more civil discussion and that he not mention how they voted to end Medicare.  BTW, that should be the current Tea Party Bestseller…”The Tea Party : How They Ran Against Government Death Panels and Won…Then Proceeded to Vote to End Medicare.”