This one is funny, as we have yet another case where the numbers illustrate how the rhetoric fails.

Americans criticize government leaders for running up the federal budget deficit, but do they practice what they preach?

Individuals are living beyond their means at an even greater rate than the government, based on recently released household debt figures.

U.S. household debt totaled $13.4 trillion at the end of 2010, or about 107 percent of the $12.5 trillion Americans earned in total household income last year, according to the Federal Reserve.

The government’s total debt of $13.8 trillion represented about 94 percent of the $14.7 trillion in national income, or Gross Domestic Product (GDP), last year.

Indeed, as this personal debt has risen, it has led to some changes in how such credit is used.

“People are still doing some spending, but what we’re seeing now is people using credit for basic necessities,’’ said Melodee Sheils, director of Consumer Credit Counseling Service of the Miami Valley. “People are using their credit cards now to survive.’’

Sheils says the counseling service’s clientele has changed dramatically from a few years ago, when many people were leveraging easy credit to buy cars and remodel their homes.

“When you’re talking about some of the things that people are charging now, you’re not seeing as much of the want as the need,’’ she said.

I find the whole “family finance” analogy a bit hard to swallow generally.  I don’t see how talking about running the world’s largest economy with over 300,000,000 people of all ages, abilities, and situations, an active military, and a multi-trillion dollar budget is in any way the same as budgeting for a small family.    Sure, there are some basic similarities, but the overall comparison loses any illustrative ability when you somehow equate paying for cable TV on the family level with paying for Medicaid on the national level.

We’ve been told for the last 30 years or so that by cutting taxes, we can raise revenue.   We have a $14.3 Trillion dollar deficit to prove that isn’t true.  Now that the end results are in, and we know that cutting taxes didn’t raise revenue, or create jobs, we are being told by some that spending our own money on 0urselves* is the real problem, and we should stop doing that.

The Republicans get away with this because most Americans think we spend vast amounts of money on foreign aid,  and they assume that’s the “spending” the Republicans want to cut.

Let’s start with international assistance. Sixty percent of people we questioned say they’d like to put foreign aid on the chopping block. So would that make a dent in the deficit?

No – but try telling that to the American public. According to the poll, on average, Americans estimate that foreign aid takes up 10 percent of the federal budget, and one in five think it represents about 30 percent of the money the government spends. But the actual figure is closer to one percent, according to data from the Office of Management and Budget from the 2010 fiscal year’s $3.5 trillion budget.

There are just so many disconnects in the current worldview of Americans, both of themselves and their government, and what it does, that I have a sincere feeling that many of us are trying to solve the wrong problems by exacerbating the real ones.

We have build up this strange notion of ourselves as  Americans that we are all self-made, completely independent, self-sufficient, and don’t need nobody.    We think this *even as we pitch in to help one another*.     Now, it seems, we are starting to believe our own hype and saying stuff like this… 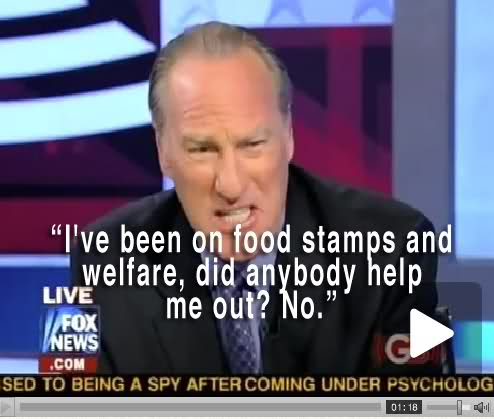 So yea… there ya go, another talking point bubble burst…which will absolutely not stop certain people from using it.