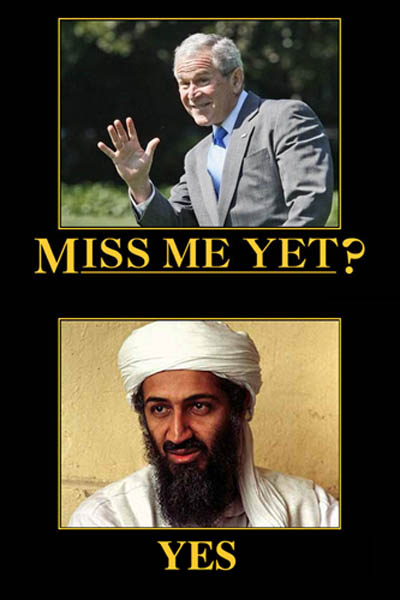 I’ve seen a number of commenters and posters pushing the concept that somehow President Bush deserves some sort of credit for the assassination of Osama Bin Laden after torturing a bunch of people and not getting Bin Laden during the seven years he was on the lam during Bush’s term.

I guess you can give Bush some credit.  After all, without his leadership Bin Laden would have never have been lulled into a false sense of security and invulnverability after Bush ignored him and invaded Iraq.

I’m finding it ever stranger to hear now about ex post facto rationalizations for torture.  The “logical” thought process goes something like this…..

In between applauding President Obama for overseeing the successful raid on Usama bin Laden’s compound, some Republicans and ex-officials are starting to question what they see as a disconnect: How can the administration be investigating CIA agents whose techniques may have led America to Al Qaeda’s top guy?

They’re calling on the Obama administration to not only restart the CIA interrogation program in some form, but to end once and for all the Justice Department’s probe of CIA employees.

BTW, that space between “applauding President Obama” is very small.   I highlighted the word in the first paragraph that makes the whole story ring false.  When you assume points of contention (as Fox does) in your opening, it doesn’t really leave that much space for anything resembling objectivity.